Polymer foams are primarily applied in the construction sector. These are used for insulation of building components such as roofs, doors, sheathing, foundations, and as sealants for windows and doors. Polymer foams are also utilized in the manufacture of polyurethane molding and decorative wood alternatives. Owing to their high energy efficiency, better-performance polymer foams help by offering higher insulation at low temperatures in order to maintain the desired temperature of products. With growing awareness about development of eco-friendly alternatives for packaging applications, manufacturers of polymer foams have developed polystyrene foam, which is exempted from VOC regulations. Polystyrene foams are used to manufacture containers such as plates, cups, meat trays, egg cartons, and fast-food boxes. 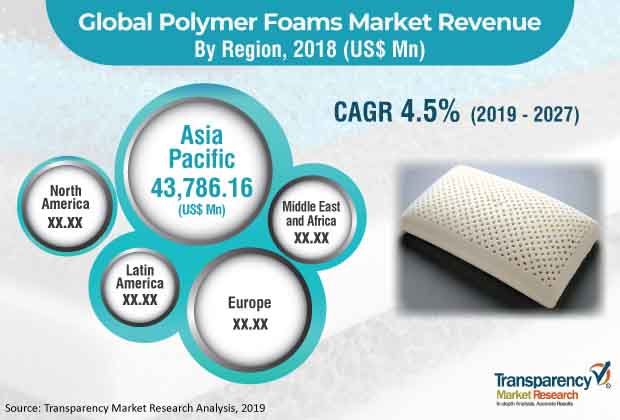 Growth of the global polymer foams market can be ascribed to rise in the demand for insulated foams in the building & construction industry. Rise in the demand for energy-efficient facade systems and strict environmental regulations are likely to augment the global market for polymer foams in the near future. Additionally, rise in population has resulted in increase in transit of people from rural areas to urban areas. This, in turn, is likely to drive the need for development of infrastructure facilities across the globe in the near future. This factor is projected to fuel the demand for energy-efficient buildings worldwide in the near future.

Attributes of polyurethane foams, such as light weight, high strength-to-weight ratios, and electric and thermal resistance, make them a perfect choice for use in construction applications. Polyurethane foams also possess excellent load bearing and impact resistance properties. These foams are widely used for insulation of housings; in interior systems of automobiles including seating, headrests, and arm rests; and in Heating, Ventilating, and Air Conditioning (HVAC) systems in aircraft, trains, and buses. In the furniture industry, polyurethane foams are extensively employed in the production of soft cores of sofas and other coverings of commercial and institutional furniture such as seating in theaters and stadiums. In appliances, polymer foams play an important role in the insulation of refrigerators, freezers, and water heaters. Polymer foams are suitable for these applications, due to their low VOC (volatile organic compound) content and ease of application. Owing to their higher shock absorbency, water resistance, and resiliency, polyurethane foams are employed to protect computers and other electronic products during transportation.